Life on the fringes 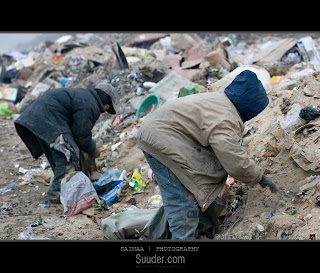 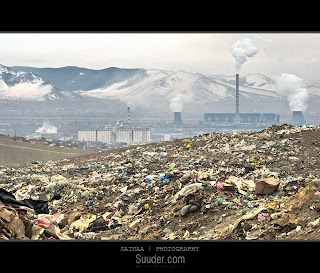 The amount of garbage in Ulaanbaatar city forthe year 2006 is estimated as 151 thousand tons and 60 thousand tons of garbage is illegally dumped without being collected. If the current situation continues till 2020, as much as 1.14 million tons will be discarded and Ulaanbaatar City will be buried in garbage. [from Embassy of Japan report. PDF available here]

Suuder.com has a series of photos taken at Ulaan chuluut rubbish dumping ground at Tolgoit. A separate reality altogether for most folks living in the middle of UB, whose waste end up at these hills where the less fortunate rummage through looking for recyclable refuse to sell: bottles, iron, copper wires etc. Much like ninja miners, these people live in terrible conditions at the rubbish dumping ground. Ulaan chuluut is only one of nearly 100 dumping grounds near UB.

A new USD10 million disposal site funded by aid from the government of Japan opened last year, located 2km from Ulaan Chuluut. According to ardchilal.com, the new site at Narangiin Enger meets the modern environmental regulations and recommendations.

Popular posts from this blog

By Asian Gypsy - June 24, 2008
According to news.mn, the chairmen of the two leading parties, S.Bayar of the MPRP, and Ts.Elbegdorj of the Democratic Party will go head-to-head in a live televised debate on Thursday night at 11pm. Thursday night at 11pm, the night before the election day. Strange timing. Perhaps they figured everyone will be up late at 11pm seeing as the Election Day is a public holiday (I don't know if it's appropriate to call it a holiday.) in Mongolia. [ Correction: The election day is on Sunday, thanks to the commentor who pointed it out] Who is going to stay up and watch this debate? Well, I would if I were there. That's just the kind of sucker I am. Would the perceived outcome of the debate play a deciding factor in who gets elected? Probably not. This is a Parliamentary election, not a Prime Ministerial election. What could an 11pm televized debate the night before the election day achieve remains to be seen. My gut tells me that many people will vote for the MPRP, simply beca
Read more

Mongolian PM discusses food shortage with the Russians and other issues

By Asian Gypsy - April 23, 2008
Wonderful stuff. Mongolia cannot expect Russian fiscal altruism to continue indefinitely. Despite the wheat subsidies, Moscow is gradually increasing prices on a number of other Russian imports. The Mongolian media has reported that the country’s civil aviation industry, like its Western counterparts, is facing disruptions due to soaring fuel costs. Mongolian airlines imports its fuel from Russia, which has drastically increased the price of its aviation fuel exports from $137 to $225 per ton over the last six months (Өдрийн Сонин, April 21). Read more of this article from Eurasia Daily Monitor Wheat subsidies in Mongolia. In Singapore and the rest of Southeast Asia, people are hoarding rice, anticipating rice shortage due to god-knows-what. Doesn't personally affect yours truly, as I've given up rice three months ago, and have ever since enjoyed a somewhat less bloated composition. I suppose it depends on how your metabolism is structured. Most regular rice-eaters eat 3 tim
Read more

Gengis Khan. Originally uploaded by maggie jones. . A giant sculpture of Chinggis Khaan on his horse by Dashi Namdakov, a Buryat Russian artist was unveiled in London on April 14th. Love the Medusa-like mane on the horse. More info here @ BBC Via Flickr: Genghis Khan on a horse by Dashi Namdakov. Marble Arch, Westminster.
Read more